Université d’Eté is a biennial summer school for 18 to 22 year olds to which the Twinning Associations can send a young person.

This year, Izzy Fryer went, jointly sponsored by Verneuil and Shelford and she wrote us the following report. 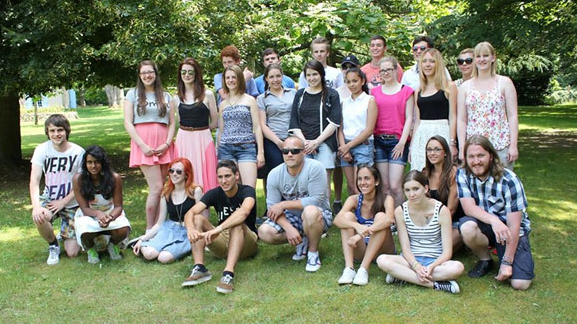 My amazing two weeks starts at Pierrefonds at the Charles Quentin institute (which is where we stayed). I met twenty-six people from different countries who brought with them their culture and language, and we all had fun fumbling with the foreign words. We were twenty-three teenagers/young adults and three chaperones but five different nationalities: English, French, German, Italian and Irish. The two action-packed weeks had many activities which had two themes: the first week was based on the First World War, The French Front and the second was concentrated on the formation of the European Union. This was broken up by the World Cup and the Germans’ victory party and the French Revolution Bastille Day at midnight.

Our days would always start the same: breakfast was from 6:30 till 8:30, and quite often assembly would be either at eight or nine and the bus would come later on; except the trips to the beach and Paris and Jean Monnet’s house where the bus came at half eight. You were expected to be present in assembly but breakfast wasn’t obligatory, as it really wasn’t that interesting.

Every day we went to a new place and evenings would revolve around singing, dancing and preparing for a Performance held on the 19th which was on the last day.

I really loved the people I met and was really upset when we left; our goodbyes were long and painful.

The first week was very rainy and cold which ruined some of the activities which had been planned: instead of canoeing and kayaking we went to a beautiful church in Beauvais and also saw a tapestry museum that day. We visited lots of memorials and watched a film on young French soldiers who had refused to fight being shot and another film on soldiers celebrating Christmas in the First World War with the Germans and English. That film had us in tears because in the end an English soldier who was filled with revenge (as his brother was dead at the hands of the Germans) was the first one to start killing the day after.

All of our days were dampened by the presence of the rain, but were lightened by the beautiful people around me. The bus trips were fun; we sang (or slept when it was the morning trips). We had many picnics under tents and pavilions, except one which was cooked by fancy chefs and was held outside as the weather held up. That day was amazing!!!! I loved the food and the games!!! We played amazing old-fashioned games: Dutch Billiard, marble games, games, games, games!!!

One night we spent playing a war card game, another day was spent doing graffiti on concrete slabs in Verneuil where there was a graffiti museum done by the prisoners of war. We went to a castle and crockery museum. The castle was absolutely beautiful, inside and out; it was a guided tour which was in French. I suggest to anyone coming that it would be helpful to have a well-rounded understanding of the language as a lot of technical terms were used in all of the explanations. 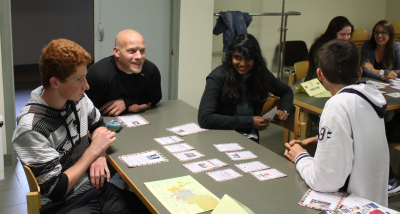 On the 13th it was the night of the World Cup, meanwhile in the afternoon we had a fun treasure hunt!!!! We went around a town called Rémy and one of the activities was finding the things related to the pictures which had been given to each group. We had been divided into four groups, and although in the end we all did the same activities, we started in different places. There were also lots of quizzes and history questions, including sport challenges (stilt walking, basketball, etc, etc).

Things livened up later on when we had another picnic/supper and we went to a pub which only had German supporters in it. So everyone turned up with flags, cakes and beer. Faces were painted the colours of the German flag and bangers were thrown around making little children cry and scream in terror. Every time a goal was scored, there was a loud commotion and more beer drunk than was necessary, except the people who were minors, they weren’t allowed alcohol! At half time, some of us rushed off to see the fireworks held at midnight in the memory of Bastille Day.

When Germany won, we had a small party at the pub, which included out-of-tune songs and not elegant dancing, but it was fun none the less. After that we piled in the bus and drove back to Pierrefonds and had another party, which was bigger than the one in Rémy!!!

The day after that was the beach day, so we had to catch the bus earlier than normal, everyone ended up sleeping on the bus ride there. We went to a stone beach in Veule Les Roses where lots of people got sunburnt. But we weren’t complaining as the sun had finally come out!! We had another picnic lunch and an ice cream and a swim in the very cold water. On the journey back we were more talkative. That evening we spent learning how to dance a traditional Irish dance and also some classic Rock dancing!!! It was sooo fun. And I also had to practise my sketch for the last night with two other people.

Wednesday the 16th we all woke up very early to go to Paris, and in Paris we visited the Pompidou center which wasn’t a common interest but was in theme of what we were studying which was the post war period after the Second World War. After that we went to a park and near Notre Dame to have another picnic and we wandered around the shops!! Later on we caught a boat near the Eiffel Tower which took us down the Seine

On Friday of the second week we had an amazing cooking experience with a lovely French chef. We cooked at his cantina the whole day!!! We made stuffed eggs (French style), fish with a fish sauce, lamb chops served with a sauce and beans and potatoes and a pear, cheese (which was not made by us) and a fruit cake!! We served each other like proper waiters and said goodbye to a friend who had to leave early.

The following day we stayed in the Charles Quentin Institute all morning practising for the performance that was going to take place later on. Late afternoon we made our way down (by bus) to a hall. Here we had been told, in advance, to cook a traditional plate from our country. So everyone split up according to their whereabouts and we start cooking. I end up making a big Victoria sponge!!!! After that, we tided up and clumsily started preparing for the show; today we had been told to look our best. So the boys who had forgotten their smart clothes borrowed clothes from someone who lived nearby!!! The performance was probably an hour and a bit. It had dancing: traditional German Dancing, traditional Irish Dancing (which we all did) French dancing (which only the French people did) and Italian dancing. We also sang. And there were also solo performances, and funny sketches (which I was a part of)!!! In the end we thanked the woman who organised the trip with a gift; Georgette was a lovely lady who thanked us in return by kissing our cheeks!!!!

This website uses cookies to improve your experience while you navigate through the website. Out of these, the cookies that are categorized as necessary are stored on your browser as they are essential for the working of basic functionalities of the website. We also use third-party cookies that help us analyze and understand how you use this website. These cookies will be stored in your browser only with your consent. You also have the option to opt-out of these cookies. But opting out of some of these cookies may affect your browsing experience.
Necessary Always Enabled
Necessary cookies are absolutely essential for the website to function properly. This category only includes cookies that ensures basic functionalities and security features of the website. These cookies do not store any personal information.
Non-necessary
Any cookies that may not be particularly necessary for the website to function and is used specifically to collect user personal data via analytics, ads, other embedded contents are termed as non-necessary cookies. It is mandatory to procure user consent prior to running these cookies on your website.
SAVE & ACCEPT