At five o’clock exactly on Saturday July 6, a large coach turned round the corner into Ashen Green. The host families waiting there welcomed 51 French visitors from 7 years old upwards, who had all come to take part in the annual twinning visit between Verneuil-en-Halatte and the Shelfords from July 6 to 9.

This was a very special visit as it was the 30th anniversary of the signing of the Twinning Charter in Shelford, and to celebrate this we gathered on the Memorial Green on Sunday 7 July. Following speeches by representatives of the Great and Little Parish Councils and by Madame Claudine Laulagnet on behalf of the Mairie of Verneuil-en-Halatte, a plaque was unveiled  which records  the planting of a Tulip Tree and a Hornbeam Tree, both kindly donated by Scotsdales. Following this, the group walked to Freestone’s Corner, where a plaque commemorates the original signing of the Charter, and then on to the Feast Marquee for the vin d’honneur, accompanied by speeches and gifts. After this, visitors and host families enjoyed a traditional afternoon tea in the Memorial Hall, with a children’s Teddy Bears’ picnic sponsored by Waitrose, culminating with the cutting of the commemorative cake, provided and decorated by Cornelia Ede. 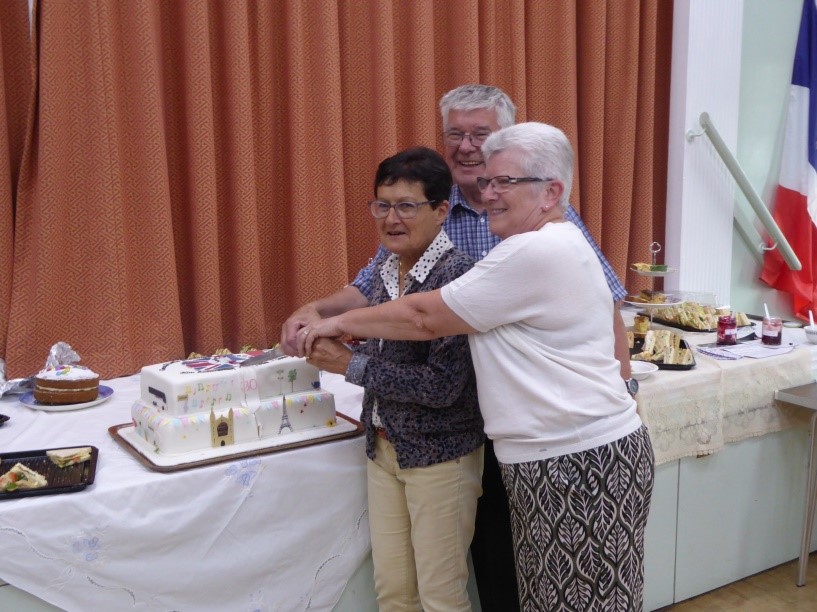 Restored by sandwiches, scones, cake and tea, the group then embarked on an energetic ceilidh – this year, a joint venture between the Feast and the Twinning Association, where even those who had never danced before were persuaded on to the dance floor.

The Ceilidh at the Shelford Feast

On Monday, the group spent the day at Burghley House, with a special quiz for both children and adults and a picnic in the grounds afterwards. And on Tuesday morning a crocodile of smiling French children set off to join classes in Shelford School, while the teenagers and adults went to Cambridge. As a final triumph of organisation, on returning to the coach we had a close-up view of her Majesty the Queen as she was driven down Silver Street on her way to lunch at Queens’ College. Returning to Shelford, we enjoyed a goodbye lunch sponsored by the local Tesco and Coop, before sadly saying au revoir to old and new friends, with promises to meet next year.